Thoughts On Steve Jobs by Walter Isaacson (So Far)

I have been reading a great book about Steve Jobs by Walter Isaacson. I find it very interesting how the author mentions that many times about his life he found himself at the intersection of technology and art. 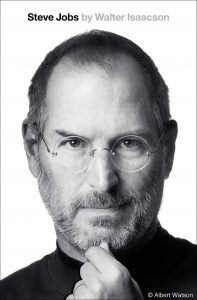 I’m still early on in the book, but I found this theme recurring quite a bit so far.

Of course, Steve Jobs is best known for his contributions to technology with Apple, Pixar, iTunes, etc. These all are great examples of combining art with technology.

Subconsious vs Conscious Thoughts and Actions in Technology

One thing that I found interesting about the development of his visions was his trip to India. He says that he felt more of a culture shock coming back to the United States than he did when he went to India. He relates how Americans use logic and reasoning far more, whereas the people in India use intuition. They quiet the mind to allow their subconscious to provide feelings of answers more so than logical conclusions.

I find this a really interesting topic.

The book Psychocybernetics talks a bit about this. The feelings of self-perception can seem to overcome logic. Our subconscious has a way of recalling information better and using that information more effectively.

An example of this would be an athlete who does not need to think about the specific body movements needed to perform certain actions in his sport, like shooting a basketball. In fact, if he were to start thinking about the individual micro-actions he would probably miss the shot. This, of course, assumes he has received proper training and already gone through the understanding and muscle memory of what he needs to do. Once he’s been trained in all the technical aspects of how to perform the action, it becomes committed to muscle memory and he more just “feels” the shot.

This makes a lot of sense in where you observe people “over-thinking” things. Of course, rational thought is incredibly important. But, I think that subconscious thinking allows us to use more of our mental resources than step-by-step analysis.

The Malleability of Reality

Another interesting point is how what they called his “reality distortion field” helped him to convince himself of the malleability of reality. It was how he was able to accomplish so much and help others to do the same. His prickly personality seemed to stem from attacks to that reality distortion field. I can relate as I find it particularly unbearable when someone tries to stand in my way because of their own self-imposed limitations.

While he cared for people in a general sense, and was known to be generous at times, Steve Jobs was known more for his intensity. Ray Dalio mentions this is his book Principles that many of the most successful people share versions of this trait. They care a great deal about humanity in general, but are not willing to let individual people get in the way of their greater mission. Bills Gates is cited as an example of this. He is literally one of the most philanthropic people to ever live, at least in terms of financial contribution. But, he is also known for his no-nonsense and direct communication style. Radical transparency and radical open-mindedness are chief tenets of Ray Dalio’s book, not to mention his life’s work and principles for success on which the book is based.

I notice it more and more in the people who have changed the world for the better. You have to be authentic and honest with yourself and others in order to get anywhere. People will try to get in your way to lack of imagination, jealousy, trying to prove something, or a variety of other reasons. But, as an entrepreneur as with SEO, our job is to overcome that and make our dent in the universe anyway.

For more information about my search engine optimization agency, visit https://helmuthampton.com or visit our company’s Google + for more about SEO. We service international clients as well as local businesses in Tampa, Florida, Bellevue, Washington, Paris, FR, and Seoul, South Korea.

We're not around right now. But you can send us an email and we'll get back to you, asap.